Reviews for The Tripping Point: An Exhibition of Fairytale Installations

Willamette Week's review:
"There’s a reason fairy tales have been plumbed for art’s sake so deeply: they’re bottomless.
Murky with our fears, desires and other shadowy drives, the stories of the Brothers Grimm, Hans Christian Andersen and the like consist of just the sort of muck in which artists love to play. The Tripping Point, directed by Samantha Van Der Merwe, lets eight playwrights run wild in the stuff—yet the production that emerges is almost immaculate." Read more...

The Oregonian's review:
"In the middle of a vast land of Fertile Ground grows a forest. And in this forest are many things both wondrous and terrible: an innocent sleeping beauty, a brave frog prince, an intrepid, high-climbing boy named Jack, and fearsome beasts both animal and man.
This is the forest of the ageless long-ago, the collective unconscious, the child’s dreams of possibility and danger.
It is the fascinating terrain of “The Tripping Point: an Exhibition of Fairytale Installations,” one of the most fascinating shows in Fertile Ground, the festival of new works that presented several dozen theater and dance events around Portland over the past 11 days." Read more... 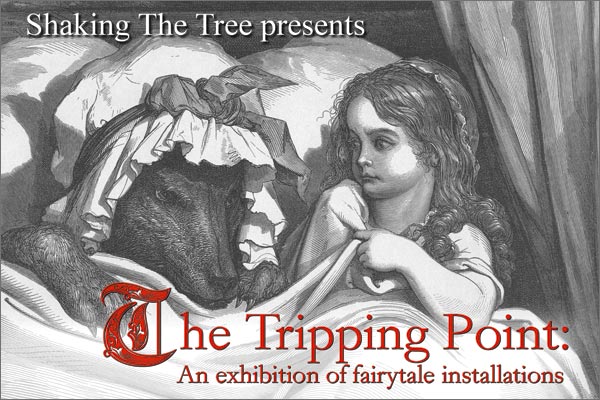 What audience members had to say about The Tripping Point:

"Saw the preview tonight! Unbelievable! Samantha Van der Merwe has done it again (and her mighty cast and crew too)....This show is part of the Fertile Ground Theater Festival! Tripping Point might be one of the most unusually conceived theater formats EVERRRR and you need to see it to believe it. Eight original works riffing off traditional fairytales, one (fantastic) actor in each, all going on at once in separate curtained rooms. You can hear the other pieces going on as you watch yours. It is a chorus of stories, as if you had opened up a book of fairy tales and can hear them being read aloud as you watch one unfold in real time. Brilliant! Can you say Drammy? Get to this one for sure!!!"

"Indeed a magical and wonderful descent into the fairy tale woods. What a lovely and unusual evening in the theater--maps, golden keys, chiming of bells and a lovely resonance between plays, characters, space, sound, and landscape. Congrats Samantha!"

"PAYDIRT. I knew sooner or later the Fertile Ground festival would knock my socks off. So far my favorite show of the run, and honestly, probably one of my favorite theater experiences ever. As in my whole life. Including performances I've been in myself. (shh, don't tell). The studio has been cordoned off into a maze of smaller spaces with hanging sheets. Each small sub-stage features a 15 minute soliloquy developed by some of Portland's finest playwrights. Each piece is inspired by a classic fairy tale, from Little Red Riding Hood, to Blue Beard, to Jack and the Beanstalk. The mix of seasoned authors yields 8 equally interesting yet widely diverse interpretations which makes moving from space to space thrilling. To make it even more fascinating, each space only holds 5-10 people at a time, so you move between performances, 8 in all over the course of two hours, becoming disoriented in the strange room, the sounds of the other performances mingling with the show you are currently watching like memories or echoes. It's completely magical. A well thought out, perfectly executed piece of theater."

"PDX Folks - do not miss this. It is an incredible experience - like entering what I always imagined Salman Rushdie meant when he described the murmuring of the Sea of Stories. Makes you think about fairy tales differently - and about how theatre MUST be about the visual, aural and spatial experience all at once. Samantha Van Der Merwe put together an experience to remember and one which i heard many insist they needed to talk about more afterwards with their friends."

"Once again I want to send you my thanks for your beautiful production. Astounding and imaginative. I will remember this experience
and your lovely innovative work for years to come."