Thursdays-Saturdays at 7:30pm
​Sundays at 5:00pm
Shows begin promptly at 7:30pm & 5:00pm. No late seating.
*Recommended for ages 16 up
​Running time: 2 hours 15 mins (including 15 minute intermission)
​Content Advisory: Some patrons may find two particular scenes disturbing or upsetting.
CLICK HERE to learn more about the content of the show.
​If you have further questions, please contact info@shaking-the-tree.com
Shaking the Tree is committed to keeping you, our artists and our staff safe when you visit the theatre. Please visit our COVID POLICY page for more information and don't hesitate to contact the Box-office with any questions.

What people are saying

"Best theatre I've seen in ages." -Patron
​
"...intense, bold, courageous, no holds barred theatre." -Patron
​
​"What a riveting, fearless, moving production." - Patron
​
"Truly amazing work that left us breathless at the end!" -Patron
​
"I saw Fucking A tonight, and was blown away. That play was one of the most powerful and affecting pieces of theater I’ve seen in a long time."- Patron
​
"Not only were we blown away with the show and acting but also with the concept, use of space, creativity and genuine whole artistry!" -Patron
​
"Fucking A is shocking, thought provoking, humorous, musical, terrifying, and has some of the most amazingly genuine acting performances I have seen in a very long, long long time!" -Patron
​
"Fucking A is fucking theatre at its finest. The best, most intense piece of theatre I’ve seen in a very very very long time. Immersive. The cast is so good, they are almost too good. Not at all what I expected. My heart and admiration goes out to Sam and the cast!" -Patron
​
"I've written this before, but the reason I think Shaking the Tree is the most interesting theatre in Portland is because they don't let you off the hook, ever, not for a single moment. As soon as you enter the theatre, you're in it without a safety net. This is a tough play. It deals with uncomfortable situations and the characters do unspeakable things. It takes you into the darkest parts of human nature and doesn't give you a path back out, and it forces you to think about what you would do in these situations, where every choice is a bad one. And because of that, it's must-see theatre."
-Krista Garver, Broadway World
Read the full review HERE
​
​"Shaking the Tree's Artistic Director Samantha Van Der Merwe realizes Parks’ vision masterfully.... The play’s relevance is just the tip of the interpretive iceberg, belying a beautifully wrought tragedy of classic proportions. Led by Seid’s incredible turn as Hester, Van Der Merwe’s cast has created a world that, however dystopic, feels disturbingly similar to our own."
-Max Tapogna, Portland mercury
Read the full review HERE
​
"​In “Fucking A,” Shaking the Tree Theatre Reveals the Inner Life of an Abortionist"
"Van Der Merwe assembled a formidable cast to populate the play’s nameless, all-too-familiar community, which is ruled by a Trumpian politician simply called The Mayor (Jonathan Cullen). The other actors include Ratterman as The Mayor’s wife, First Lady, John San Nicolas as the benevolent Butcher, and Kayla Hanson as Canary Mary, the sex worker who is Hester’s best friend."
-Bennett Campbell Ferguson, Willamette Week
Read the full article here
​
"In Suzan-Lori Parks' drama "Fucking A," the "A" is for "abortionist," not "adulterer." Actor Kayla Hanson talks about the issues and the action."
​Read the interview here
​
"Presented with Shaking the Tree's bold vision, Fucking A is shaping up to be one of the most anticipated productions of the fall."
- Max Tapogna, Portland Mercury
​
"Like In the Blood, Fucking A comes as close to a classical tragedy as anything in the contemporary theatre. Fucking A's Hester calls to mind Mother Courage and Medea, but she has a force and a pathos all her own."
- Lawson Taitte, Dallas Morning News

An otherworldly tale involving a noble Mother, her wayward son, and others. Their troubled beginning and their difficult end.
​Hester Smith, the revered and reviled local abortionist, hatches a plan to buy her jailed son’s freedom—and nothing will deter Hester from her quest. In this violent and wild-eyed blend of story and song, which harkens to Brechtian and Jacobean structure, Hester’s branded letter A becomes a provocative emblem of vengeance, violence and sacrifice.

“Fucking A” is presented by arrangement with Concord Theatricals on behalf of Samuel French, Inc.

About the playwright: Suzan-Lori Parks 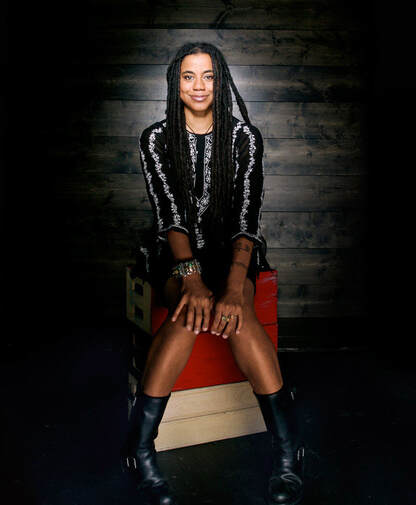 Named one of Time magazine’s “100 Innovators for the Next New Wave,” in 2002 Suzan-Lori Parks became the first African American woman to receive the Pulitzer Prize in Drama for her Broadway hit Topdog/Underdog.

A MacArthur “Genius” Award recipient, she has also been awarded grants by the National Endowment for the Arts, the Rockefeller Foundation, the Ford Foundation, the New York State Council on the Arts and the New York Foundation for the Arts. She was most recently awarded the Dorothy and Lillian Gish Prize for 2015. Her new play Father Comes Home From The Wars (Parts 1, 2, & 3) made its world premiere at the Public Theater in New York, followed by a celebrated run at the A.R.T in Cambridge, MA. The play was named a finalist for the 2015 Pulitzer Prize for Drama and was awarded the 2015 Edward M. Kennedy Prize for Drama Inspired by American History as well as the 2014 Horton Foote Prize. Parks’s work on The Gershwin's Porgy and Bess was honored with the 2012 Tony Award.

Her numerous plays include The Book of Grace, In The Blood (2000 Pulitzer Prize finalist), Venus (1996 Obie Award), 365 Days/365 Plays, and The Death of the Last Black Man in the Whole Entire World, among others. She’s written a novel, Getting Mother's Body, published by Random House. Her first feature-length screenplay was Girl 6, written for Spike Lee. She’s also written screenplays for Brad Pitt, Denzel Washington, Jodie Foster and Oprah Winfrey, adapting Zora Neale Hurston’s classic novel Their Eyes Were Watching God, which premiered on ABC’s Oprah Winfrey Presents.
​
Parks is currently writing an adaptation of the film The Harder They Come for a live stage musical. Suzan-Lori is the Master Writer Chair at the Public Theater, and she also serves as a professor in dramatic writing at New York University’s Tisch School of the Arts.